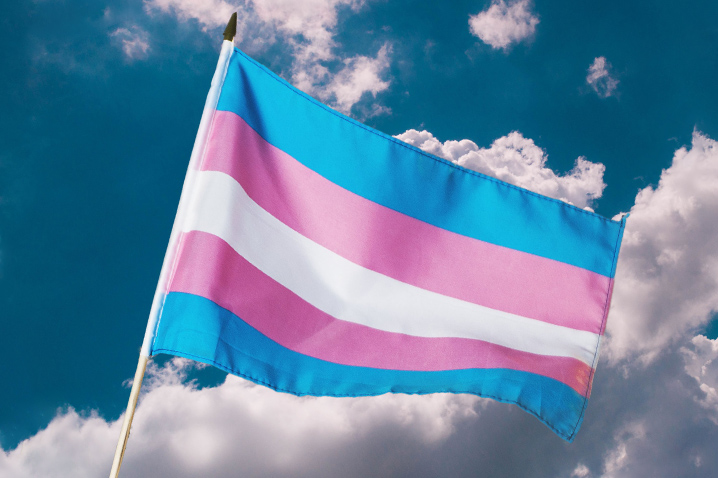 International Transgender Day of Visibility (TDoV) is held on 31 March each year to celebrate the successes and resilience of transgender people and gender non-confirming people. The day raises awareness of their experiences and rights, and recognises the discrimination and transphobia they experience.

To celebrate TDoV 2021, the Library has compiled a short list of highlights from our collection that centres on transgender experiences and stories. All of these resources can be found within the Library catalogue, and can be easily accessed using the QR codes provided.

We’re also very proud to share with you this poem written by University of Sydney student Samantha Baker: Visible; to be seen.

Trans+: Love, Romance, and Being You

Trans+ offers an honest, all-inclusive, uncensored guide with real-world information for teens who are transgender, nonbinary, gender-nonconforming, gender-fluid, or questioning their gender identity, and for cis-allies.

This easy-to-read book is full of essential information as well as QR codes linking to a plethora of other resources. It is a must-read for everyone!

Honeybee is a heartbreaking, life-affirming novel that throws us headlong into a world of petty thefts, extortion plots, botched bank robberies, daring dog rescues and one spectacular drag show.

At the heart of Honeybee is Sam: a trans, resilient young person battling to navigate the world as their true self; ensnared by loyalty to a troubled mother, scarred by the volatility of a domineering stepfather, and confounded by the kindness of new alliances.

Honeybee is a tender, profoundly moving novel, brimming with vivid characters and luminous words. It’s about two lives forever changed by a chance encounter — one offering hope, the other redemption. It’s about when to persevere, and when to be merciful, as Sam learns when to let go, and when to hold on.

Black on both sides: a racial history of trans identity

Delve into this book to uncover the overlapping histories of blackness and trans identity from the 19th century to the present day.

In Black on Both Sides, C. Riley Snorton identifies multiple intersections between blackness and transness from the mid-19th century to present-day anti-black and anti-trans legislation and violence.

Drawing on a deep and varied archive of materials, Snorton attends to how slavery and the production of racialised gender provided the foundations for an understanding of gender as mutable.

Transgender Resistance: Socialism and the fight for trans liberation

Trans rights and trans lives have come under increasingly vicious ideological attack in recent times, from the “bathroom wars” and Donald Trump’s anti-trans edicts in the United States, to attacks on proposed changes to the Gender Recognition Act in Britain.

Transgender Resistance brings together key strands of the opposition to these attacks – on the streets, in communities, in workplaces and in unions. It addresses the roots of transphobia and the history of gender transgressive behaviours.

It highlights trans peoples’ fight for the freedom to live authentic lives and explains why that fight deserves unconditional solidarity in all sections of the left.

Transgender Warriors: making history from Joan of Arc to RuPaul

In this fascinating personal journey through history, Leslie Feinberg – one of the most prominent transgender rights activists today – unearths a vast body of evidence that throughout history there have always been people who defy cultural boundaries of sex and gender. During an embattled childhood and teenage years as a gender outlaw, Feinberg began a search for others struggling to assert an identity.

What zie found was a long tradition of individuals fighting back against injustice – from Joan of Arc to the Welsh peasants who cross-dressed to protest taxes, from the Black and Latina drag queens who led the Stonewall rebellion to transsexual parents fighting for custody today. Traditional society often exacted a terrible price from these transgender warriors, and Feinberg urges us now to receive them as hero/ines and visionaries.

Illustrated with many previously unpublished historical images and contemporary photographs, Transgender Warriors is an eye-opening excursion through the history of sex and gender expression and a powerful testament to the resilient and rebellious spirit.

Trans Dilemmas presents the findings of a three-year research project which examined the lived experiences of trans people in Australia’s Northern Territory. The book argues that whilst trans people, who live in remote areas, experience issues which may not be distinct from those living in urban areas and the inner-city, these issues can be aggravated by geographic and demographic factors.

Trans Dilemmas represents an important contribution to contemporary research into the lives of transgender Australians. It gives a voice to those transgender people living in the more isolated communities in Australia, which up until now, have been largely unheard. For students and researchers in Queer Studies and Gender Studies, this is valuable reading.

A film directed by Marcelo Barbosa and Aude Chevalier-Beaumel

The revolutionary Indianara fights with her gang for the survival of transgender people in Brazil, striving to put into practice her ideals.

Nearing her fifties, facing the attacks of her political party and suffering the advance of totalitarianism, she joins forces for a last act of resistance.

Leitis in Waiting is the story of Joey Mataele and the Tonga Leitis, an intrepid group of transgender women fighting a rising tide of religious fundamentalism in their highly religious and conservative South Pacific Kingdom.

With unexpected humour and extraordinary access to the Kingdom’s royals and religious leaders, this emotional journey reveals what it means to be different in a society ruled by tradition, and the challenge of being yourself without forsaking culture and tradition.

A film directed by Sean Baker

Shot on an iPhone 5, Tangerine is a 2015 American comedy-drama film about a transgender sex worker who discovers that her boyfriend/pimp cheated on her while she was in jail and the drama that ensues as she seeks revenge.

A film directed by the Wachowski sisters

The Matrix is a science fiction must-see directed by the Wachowski sisters. This 1999 classic is available to watch online via the Library.

The story follows Neo, a computer hacker, who is led to discover that life is nothing more than a simulation controlled by artificial intelligence.