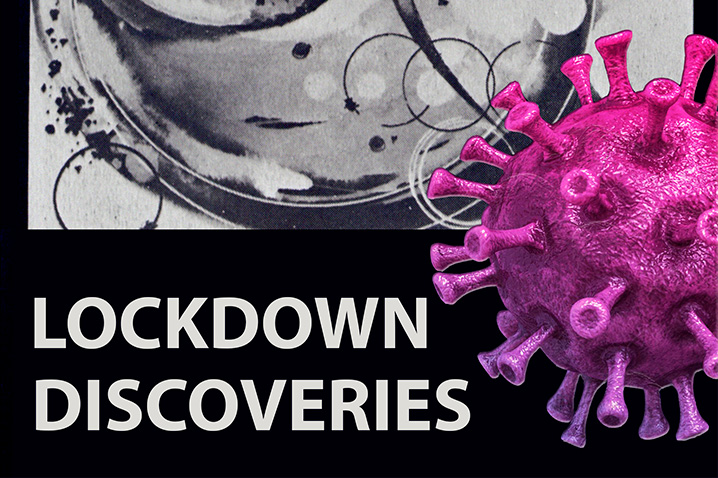 The Lockdown Discoveries exhibition presents highlights from the Ron Graham Science Fiction collection, handpicked and curated by the RBSC Cataloguing Project Team. This is Part 1 of our blog about the exhibition. Read Part 2 and Part 3.

Graham had encyclopaedic knowledge of early science fiction; he was the publisher of Vision of Tomorrow magazine and the co-owner of the first science fiction bookshop in Australia, Space Age Books (originally named The Space Age Bookshop), until his death in 1979. Fisher Library is very fortunate to be the custodian of Graham’s extensive private library.

Mass printed books can occasionally become valuable when a copy is inscribed by the author or perhaps a famous owner. Attributes such as autographs, inscriptions, bookplates and decorations may provide insight into the life, friendships and personality of authors. Take for example, the inscriptions written by the author, Ben Bova, to the science fiction enthusiast, Ron Graham. There are more than 40 Ben Bova books in Graham’s collection, many of them signed with a personal message. It is gratifying to observe how friendships develop between an author and a fan.

There may be more hidden inscriptions in books ready to be discovered. You can find books with unique attributes in the collection by using Advanced search in the Library’s catalogue. Enter the call number Graham SF and the keyword inscribed (or bookplate, depending on your interest). This search will retrieve a list of titles that have these attributes.

A bookplate, also known as ex-librīs (Latin for ‘from the books or library’), is a printed or decorative label inserted into a book, usually on the front endpaper to indicate the name of the book’s owner.

What fascinated me while cataloguing the Graham SF collection were the bookplates. I adored the artistic designs, some simple and others with amazing detail. The thought that the item once belonged to a certain person, made me wonder about the history of the book. How it was housed? In a large personal library or in a box sitting in the basement? Did it travel around before it landed in Ron Graham’s collection?

Often, bookplates reflect the owner’s position in society, or in this instance, their passion for science fiction.

Here is one of Ron Graham’s personal bookplates. The designer of the bookplate is not known.

Another bookplate for Ron Graham was designed by the artist, Virgil Finlay. Finlay was one of the most popular illustrators for pulp magazines, particularly Weird Tales and Famous Fantastic Mysteries. The bookplate illustration below was also used as the cover of the fanzine The Mentor, number 19.

Not only is this bookplate aesthetically pleasing but it reveals that the books previously belonged to the former Prime Minister of the United Kingdom (1916-1922). David Lloyd George was one of Britain’s most well-known figures of the 20th century, best known for guiding Britain through the First World War. Lloyd George had a personal library and part of that collection is now housed at the University of Kent.

Aside from Ron Graham’s bookplates, the bookplate I have seen most often is that of John Carnell. Carnell was a British editor, especially known for New Worlds (1946-64), New Writings (1964-75), and Science Fantasy (1951-64). John Carnell is known to his friends as either Ted or John which is evidenced in quite a few of the books in Ron Graham’s collection, with inscriptions from countless authors addressing him as Ted.

In what has long been perceived as a male bastion, women have made their mark and continue to shape and challenge the limits of the science fiction genre. Let’s look at three of these amazing women and their contributions.

Andre Norton (Alice Mary Norton) was a female writer who chose to adopt a male pseudonym to compete in a predominantly male market. The first female Science Fiction Writers of America Grand Master challenged gender barriers introduced new ideas to the genre, and went on to become one of the most prolific science fiction writers of all time.

Aimed at a young adult audience, Norton blended the genres of science fiction and sword and sorcery in her highly successful Witch World saga. Spell of the Witch World, a collection of three short stories, provides a good introduction to the Witch World.

Ursula Le Guin, one of the most influential writers the science fiction genre has ever known, was declared a Living Legend by the U.S. Library of Congress in 2000. Le Guin was strongly influenced by her interests in anthropology and feminism throughout a career that spanned almost 60 years.

In The Left Hand of Darkness, an envoy is sent to report on the inhabitants of an icy planet, only to find a people who have developed only one gender. This novel delves into the themes of sex and gender. One of the genre’s first feminist novels, and considered its most famous study of androgyny, this book led to a new progressive era in science fiction.

Joanna Russ was a true pioneer of feminist science fiction who believed the genre was a perfect platform for radical ideas. Written with an undertone of anger and wit, there can be no doubt of the focus on gender and sex in the more than 50 short stories and novels penned by this award-winning author.

The Female Man is the story of four women from parallel worlds. When they cross to each other’s worlds they explore and question the constraints of gender in their imaginary societies. Considered one of the most influential works in feminist literature, this novel will expand your notions of the science fiction genre.

This is part 1 of a three-part blog series. Read Part 2 and Part 3 or learn more about the Lockdown Discoveries exhibition generally.