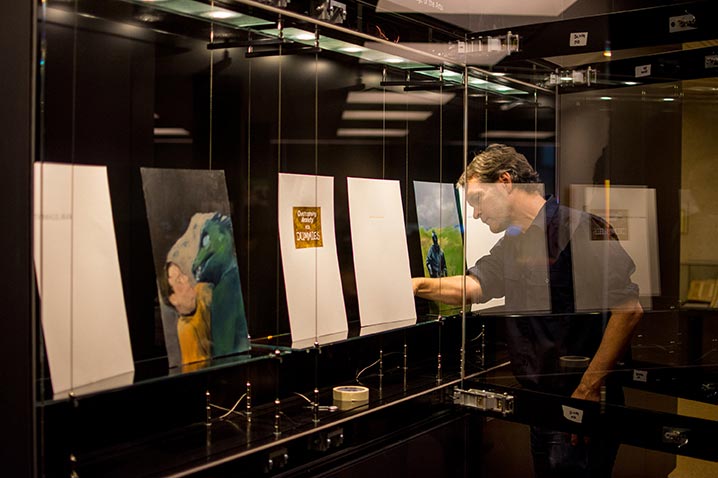 Come and check out the final 2016 installment of our Ex Libris Fisherarium Series featuring students from the Sydney College of the Arts curated by Associate Professor Michael Goldberg.

It consists of a series of 10 book titles removed from their original contexts. Each title was chosen for its uncanny or humorous connotations once removed from its wider context. Considered collectively, these titles suggest a type of quasi-Dadaist poetry whose combined effect hints at alternative critical, playful and/or possibly even pataphysical, readings.

Graphically the original layout of each book title has been retained although now each has been rendered in watercolour as a ‘painting’. These works further reference the importance of text in contemporary art and artists as diverse as Ed Ruscha and Marcel Broodthaers. Accompanying these text works are figurative paintings by Jelena Telecki. These all respond to the book titles. Together the appropriated titles and their figurative interpretations, establish an open dialogue of fairly infinite suggestability.

‘Objects in the Mirror…’ (may be closer than they appear – as the warning goes) speaks of how texts and images continually interpolate one another while remaining fundamentally differentiated. The juxtaposition of text and image in this instance may be considered a type of improvisation that draws out the latent possibilities concealed behind the most ordinary words and the words that underlie the most stubbornly elusive representations. 21 August to 13 October 2014
The Three Phases is a series of 55 predominantly colour photographs mounted on gaterboard. These photos were edited down from hundreds of related others. All the photographs were taken around various Sydney University campuses especially at Sydney College of the Arts and Fisher Library my two workplaces. The photos also include reframed images of otherwise random pages within books I have discovered recently as a frequent user of the Library. Each cabinet has been arranged according to a particular book title suggesting a theme. These constitute the ‘three phases’ of the work’s overarching title; Phase One – The Construction of Reality, Phase Two – The Art Crisis and Phase Three – Archaeology as a Political Practice. There is a strong focus on the everyday in this ensemble of works that is combined at times with other more absurdist representations. This combination speaks of a certain anxiety regarding the ‘truth’ of photographic imagery in our pervasively digital age but also the freedom for constant recombination digital technology allows. Overall, the images are arranged to imply an open poetic narrative relative to the theme of each cabinet. Their arrangement over three descending floors also hints at the spatial dimension of photographs as a collective archive to be mined in ever differing ways.