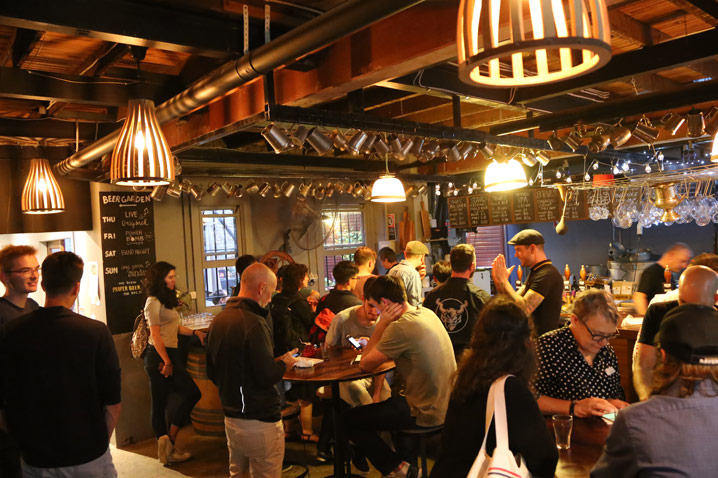 On 4 October 70 students, staff and alumni packed into Staves Brewery to discover who would win the Rare Books Rare Brews competition. The competition, launched at the start of semester, challenged entrants to pick one of 17 historical beer recipes from the Rare Brews exhibition and brew their own interpretation. The resulting beers would then be judged by a panel of qualified beer judges on aroma, colour, taste, and quality.

Nine entries were dropped off at Staves Brewery ahead of the awards night and the entrants spent an anxious week waiting to hear how their beers performed. Pizzas were delivered, and everyone gathered in front of the stage where Jim Cook (University of Sydney Tech Lab) gave a fascinating talk on the history of beer driven innovation. Finally, Steve Drissell of Staves announced the winning beers.

In first place where Nathan Danckert and Meghann Thai from the Sydney institute of Agriculture and their ale with honey. Jez Fletcher entered an ale with the taste of apricots to clinch second place, and Thomas Botting impressed the judges with his Juniper ale for third place. Nathan and Meghann walked away with a “day as a brewer” experience with Staves along with gift vouchers and merchandise packs.

Afterwards, guests were able to try each of the competition entries as well as the Blackberry Ale brewed by the Library during the Fisher demonstration. It was a wonderful close to a successful night, and the enthusiasm and support from the brewing community helped to make this a memorable competition and event.