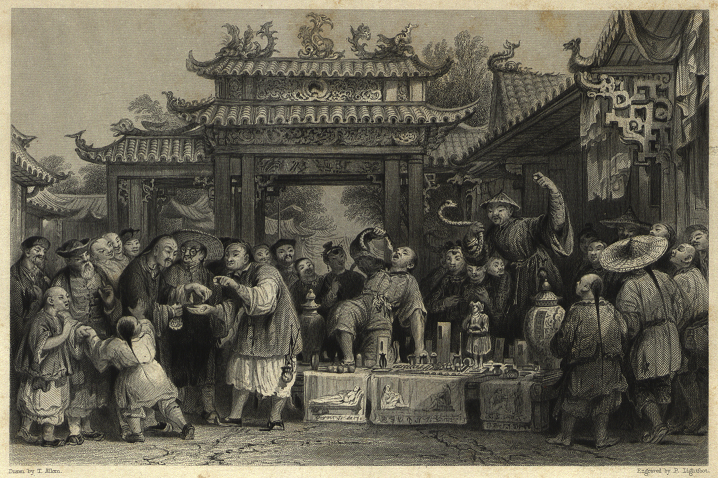 Drawing on historical materials from the Rare Books and Special Collections in the Fisher Library, Perspectives of an Outsider is an exhibition featuring on Thomas Allom’s 4-volume books China Illustrated which were first published by Fisher Son & Co. in 1845 in London. Thomas Allom was a well-known British traveler and illustrator in the 19th Century. These 173-year-old travel books have 75 steel engravings of original sketches by Thomas Allom and descriptive letters of Chinese social habits and scenery written by an Irish clergyman, G.N. Wright.

Perspectives of an Outsider is an exhibition that explores ‘what’ Thomas Allom as a British travel artist fascinated with and analyze ‘how’ he depicted Chinese social life using the art historical concept of Orientalism. Digging into ‘what’ and ‘how’, visitors will be able to see the 19th century China from an outsider’s perspectives. Outsider’s perspectives can be fresh, valuable and epigrammatic while sometimes full of discrimination, bias and prejudice. Through Alloms’ eyes, visitors can gain an insight into Chinese history of the 19th century, the so-called ‘century of humiliation’. This exhibition also reminds us of the importance of cultural diversity and respect for cultural uniqueness. As there are no two identical leaves in the world, each of us is different.

2 thoughts on “Rare Books: Perspectives of an Outsider”