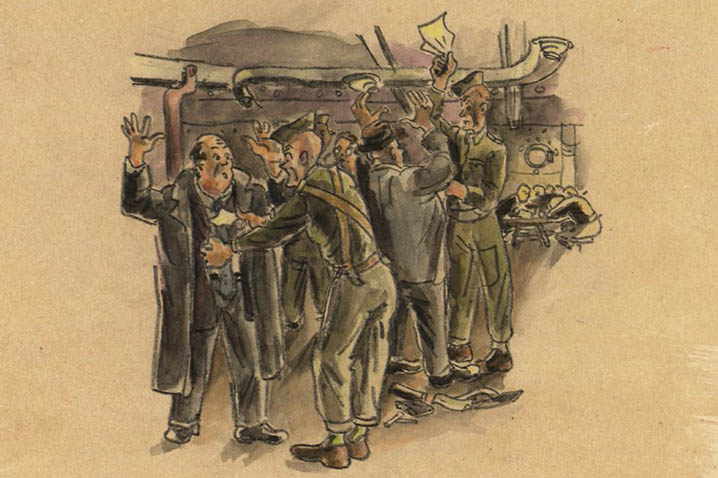 Fritz Schonbach was 18 when Nazi forces invaded Austria in 1938 and he was forced to flee. While his parents went to Argentina, Schonbach escaped to London where despite being a Jewish refugee he was eventually declared an enemy agent.

On the 10th of July 1940 Schonbach, along with 2,000 other German speaking Jewish men, became passenger aboard the infamous HMT Dunera and bound for Australia. The conditions and treatment aboard the Dunera were horrific, but Schonbach was content as long as he was creating his art.

With only a stub of pencil, he recorded the journey and conditions on the Dunera, his arrival in Sydney, and his time at the Hay Internment Camp through a series of beautiful drawings, satirical cartoons, and later watercolor paintings. During his time in the Hay camp, Schonbach and two other young men created a bi-weekly newspaper that was remembered fondly by the other internees for years to come. At such a young age, despite the often-depressing conditions and the prohibiting aspects of camp life, Schonbach managed to view this time in his life as an adventure where he was free to follow his artistic passion.

After his internment, Schonbach became a member of the 8th Employment Company of the Australian Army under the command of Captain. E. R. Broughton. He was released from duty by 1946, a demoralizing entire year after the end of the war, at which time he moved to Sydney and began a painting and drawing degree at what is now the National Art School. During his three years of study Schonbach became engaged to local photographer Beverley June Heydon. They were married in 1950 and travelled for several years before eventually settling in Buenos Ares, where Schonbach worked as an artist, illustrator, and cartoonist, and he and June had two children.

His paintings from this time are vibrant and evocative. Never completely content in the politically and socially unstable Argentina, Schonbach eventually moved with his family to the US, and then later to Canada where he lived until his death in 2011. Throughout his life, art continued to be a central theme and driving force.

This exhibition celebrates Schonbach’s work from very difficult to exciting times of his life.

This Exhibition has be curated by Laura Kevan. Laura is a current Master of Museum and Heritage Studies student at the University of Sydney. Previous she completed a Bachelors of Art Theory with first class Honours and the University Medal from UNSW: Art and Design, with a focus on contemporary war memorials and commemoration. Having been volunteering and interning with art organisations across Sydney for the last few years, Laura has applied this knowledge and experience to her current internship with Australian Archive of Judaica (AAJ) studying the artworks and life of Fritz Schonbach, developing an exhibition, and writing his bio for the AAJ website. A lifelong lover of 20th century art, Laura has visited numerous art galleries worldwide and has spent years on its study. As such, the chance to handle and engage with Schonbach’s work has been an exciting opportunity. His life is truly a wonderful untold story, and the artworks, firsthand accounts, and period newspapers from the Dunera and Hay Internment Camp available in the AAJ are impressive and interesting.