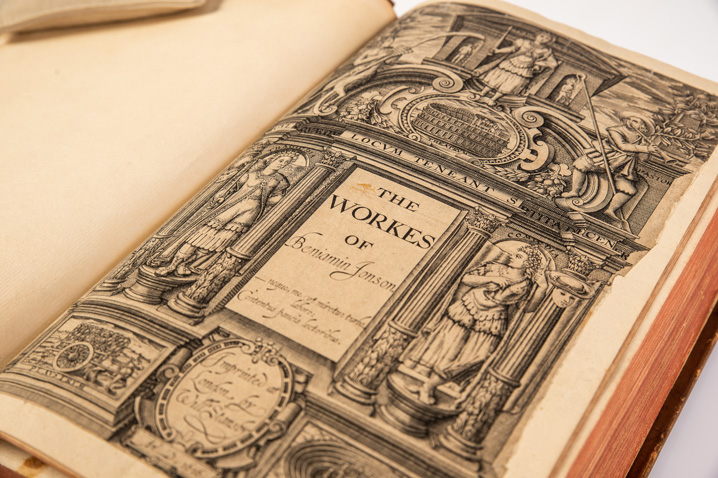 The Library recently received an extraordinary donation: a first edition of The Workes of Benjamin Jonson from 1616, along with a 16-volume set of the Plays and Poems of William Shakspeare (sic) curated by Edmond Malone and originally published in 1790, and a rare complete set of Malone Society publications.

The donors, Charles Littrell, former Executive General Manager of APRA, and his partner, haematologist Dr Kimberly Cartwright, made this very generous gift to commemorate the tenure and achievements of the University’s Vice-Chancellor and Principal, Dr Michael Spence AC, prior to his departure in December 2020.

University Librarian Philip Kent explains how he was “delighted to have met Charles and Kimberly through this special gift. The Jonson and Shakespeare works have enormous value to the University. As a collector myself, I was impressed by the way that Charles scoured the world to find the volumes to complete the set of Malone Society publications. Their gift will be enhanced as future volumes are added each year.”

The gift isn’t just a generous addition to the Library; it is a priceless resource for researchers and students across the University.

The 1616 first edition of The Workes of Benjamin Jonson (his ‘Folio’) is the original theatre book in the English language. As such, it is “one of the most important books published in England,” according to Dr Huw Griffiths, Chair of the Department of English at the University of Sydney.

“It marks the first time that a living author made a concerted effort to present his writing as a distinct and coherent body of work.”

Benjamin Jonson (1572-1637) was an English poet and playwright, best known for popularising the dramatic comedy genre, ‘comedy of humours’. As a dramatist, he is generally regarded as second only to Shakespeare.

Comprised of three kinds of literary texts: plays; poems and epigraphs; and the texts of his masques (court entertainments), Jonson’s Folio served as a model for Shakespeare’s first collected works, his ‘First Folio’ (1623).

“By placing the plays and masques in this magnificent book, Jonson is making a bold statement,” says Dr Griffiths. “Plays and masques are ephemeral, time-dependant events, and, of course, they had been printed in less prestigious print texts before.” Jonson’s innovation was to “take them out of their short-term contexts, insisting on their value across time.”

Professor of Early Modern Literature, Liam Semler, concurs with this view. “Various people at the time expressed surprise and derision at the fact that a mere ‘play’ could be declared a ‘work’, and so this book helped contribute to the emerging idea of modern plays as worthy of some elevated status.”

Dr Griffiths says the Folio will be used for research as well as for teaching students about early books and how literary value is established. “The book wonderfully situates Jonson in complex contexts: the courtly writer, familiar with putting on royal entertainments, but also the working writer, engaged in the life of the printing house. He is really testing out (for all of us) how literary fame might be sustained in print.”

Though Professor Semler and Dr Griffiths have only had a short time to examine our new copy of the Folio, it is already looking very promising. The presence of “stop-press” corrections in the copy, where either the printer or the author changed text in between individual printings, indicates that our copy was produced later in the print run.

As the Library already owns a partial copy of the 1616 Folio, the value for our researchers is enhanced by the ability to make comparisons. Differences in the text will teach us how books like this were put together, and the involvement of printing houses (and potentially authors) in correcting text during a print run.

The Jonson Folio, Shakespeare volumes and other books from the donation can be viewed in our Rare Books & Special Collections reading room by appointment.

You can also listen to an interview about the Folio with Professor Liam Semler on ABC Drive with Richard Glover (commencing around 42 minutes into the program). 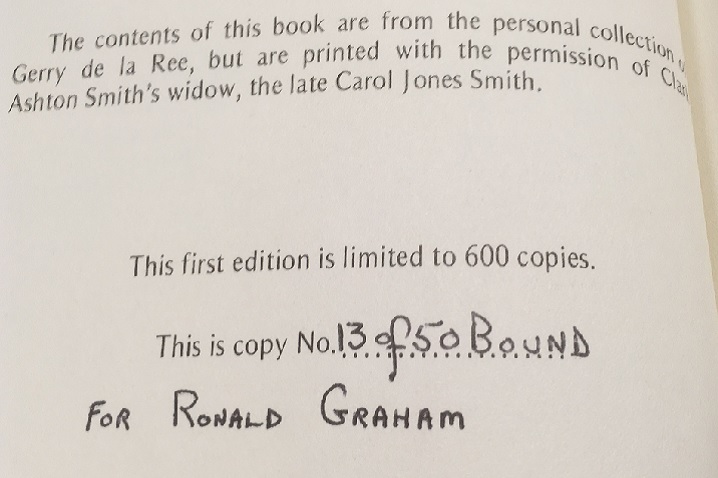 During the Covid-19 period the Rare Books & Special Collections cataloguing team has been tackling, from home and using photos, the books in the Graham science fiction (SF) collection. The books number around 30,000. In addition, the collection includes large holdings of comics and magazines, serials or journals, all still to be catalogued online.

END_OF_DOCUMENT_TOKEN_TO_BE_REPLACED

Shintō (神道) has been at the heart of Japanese culture since the country has named itself Nihon (日本), “the sun’s origin”. It originated in the relationship between ancient Japanese and the power they found in nature . Through centuries of recorded history, Shintō continues to take part in the framing of Japan both to the outside world and to the Japanese themselves. Shintō is a way of life and a way of thinking. Drawing on the Japanese postcard collection from the University Library’s East Asian Collection, this online exhibition is about to walk you through the spiritual Shintō world.

END_OF_DOCUMENT_TOKEN_TO_BE_REPLACED 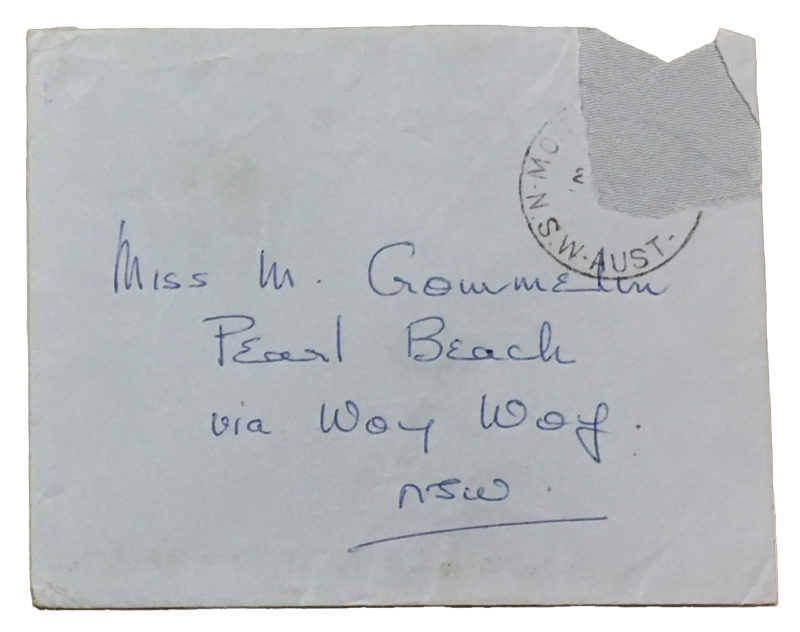 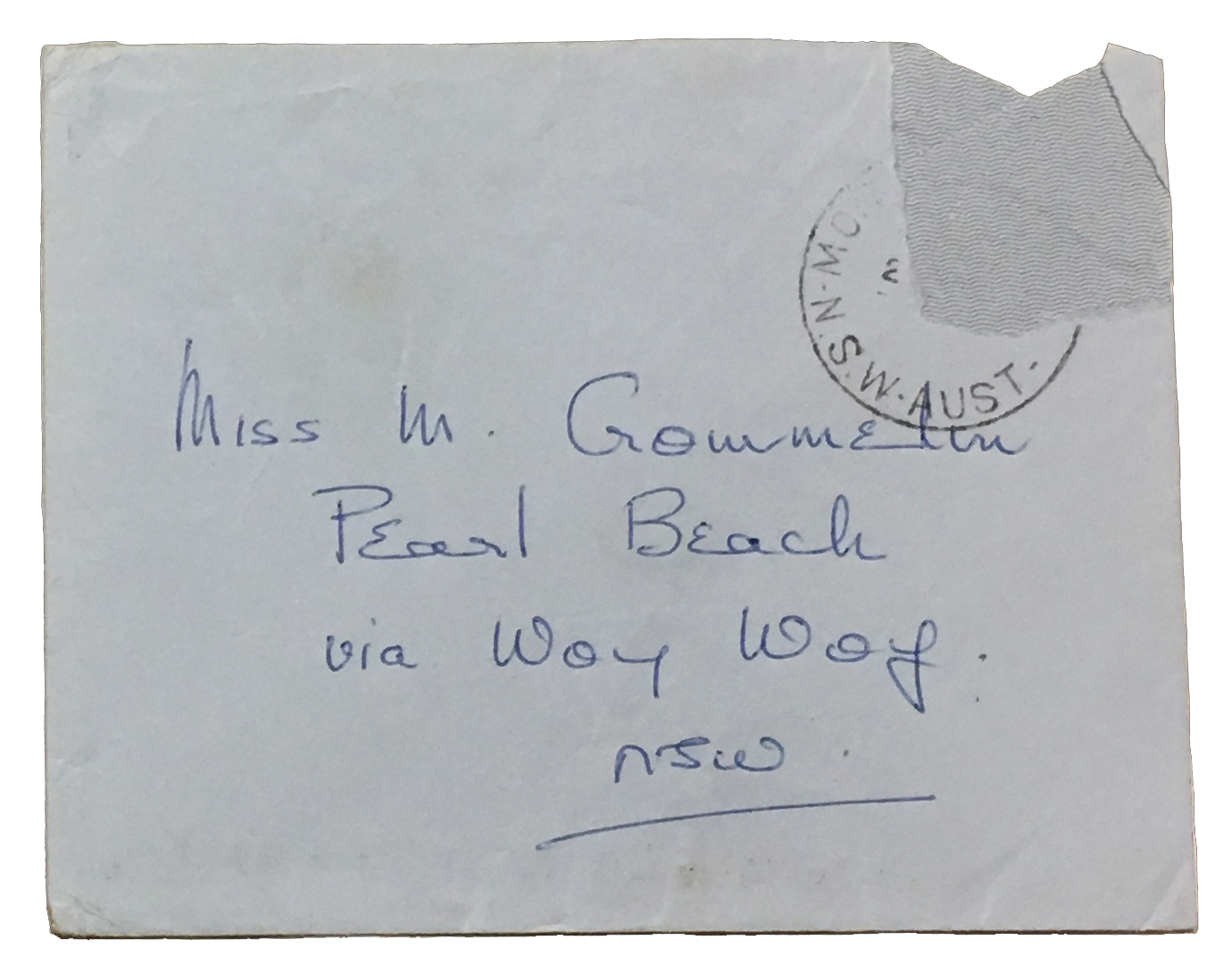 Working on the Crommelin Collection, I encountered the envelope pictured above without a full address. I supposed that she must have been a very prominent person during her time. Further research concluded that she was the first Post Mistress in Woy Woy (1906-1910)!

Minard Fannie Crommelin was born on 29 June 1881 at Aston station, near Bombala, New South Wales. Her experience working in the post office started as early as 12 when she assisted the postmistress at Burrawong. Minard continued learning at the Sydney Church of England Grammar School for Girls then worked as an assistant in the post office at Moss Vale. In 1906, she became the acting postmistress in Woy Woy, where she stayed until 1910. During the rest of her working life, she was relieving postmistress in over 150 towns.

Minard Crommelin often explored local bushland for walks and picnics with friends. When visiting Pearl beach, near Woy Woy, she spotted a lyrebird for the first time, which encouraged her to retire there. Pearl Beach has the best of both worlds: tranquil bush, full of birds & crickets chirping, and a short walk to a gentle rolling wave beach.

At the end of her working life in the mid-1930s, Crommelin visited England, Ireland and Europe to learn about her family history. She was also active in many conservation and natural history societies and began purchasing antique furniture and rare books on Australia and its natural history. Books owned by her have a bookplate designed by Neave Parker (1910-1961), an English natural history artist. The bookplate contains the Crommelin arms with three merlettes and a chevron, and illustrations of the Australian bush with native animals such as koalas, a kangaroo, and a lyrebird. 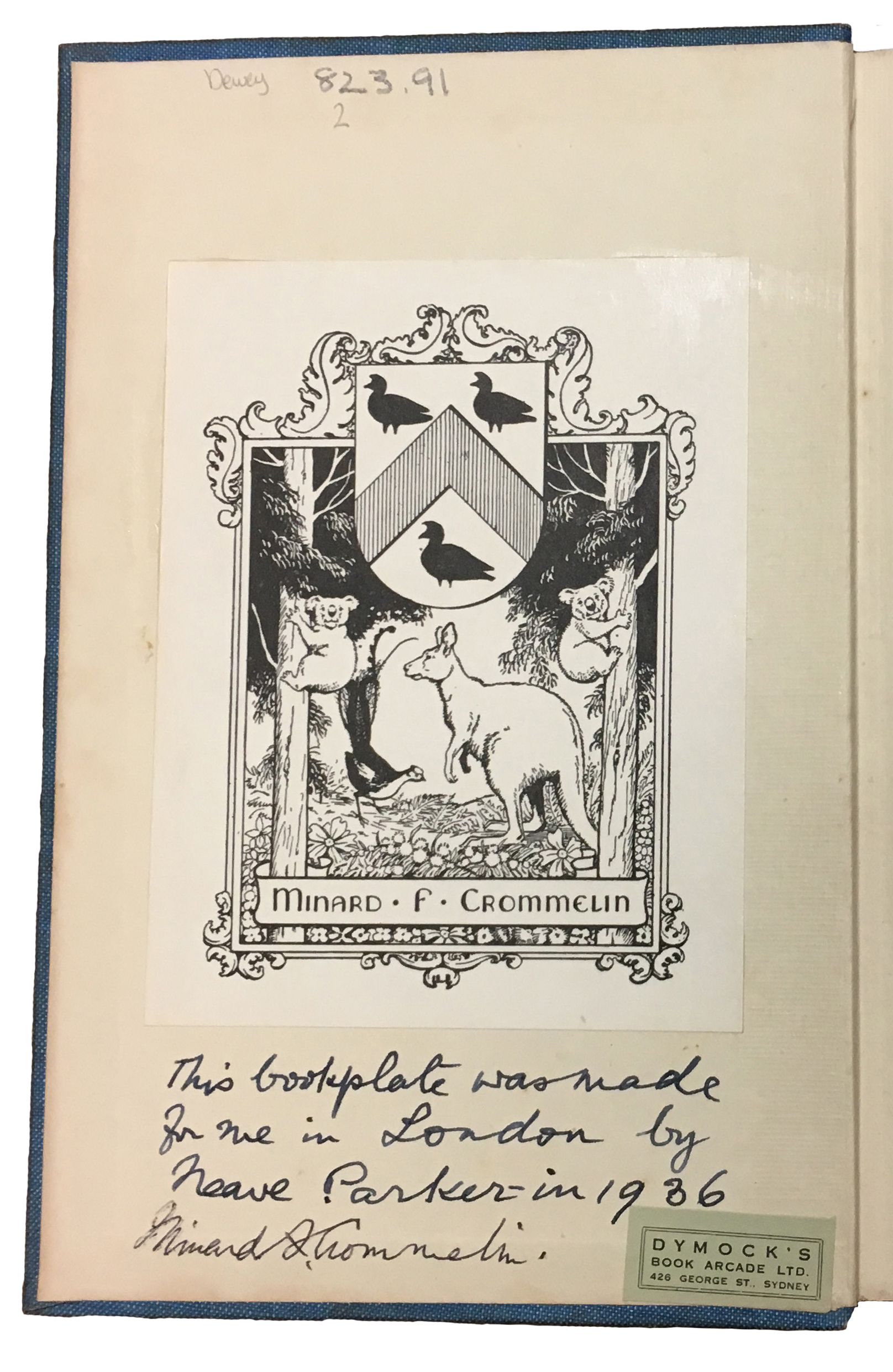 After returning to Australia, Crommelin purchased around seven acres of land adjoining a sanctuary at Pearl Beach. She named the main residence and library “Warrah”, an Aboriginal word meaning “a wide view” or “seen from a long way”. In 1946, Crommelin gave the property along with all other assets to the University of Sydney, with the provision that she would still be able to stay and live there for the rest of her life. The original copy of the deed of gift is archived at Mitchell Library.

Her legacy still lives to present day. The University named the Crommelin Biological Research Station in her honour, which is now used by our visiting scholars. The books previously held in Warrah were transferred to Fisher Library’s Rare Books and Special Collections .

In addition to her invaluable contribution to the University of Sydney, Crommelin was also active in assisting local communities. Crommelin Place in Canberra, Crommelin Crescent in St Helens Park, NSW, and Crommelin Native Arboretum, Pearl Beach (shown below), are all named in her honour. 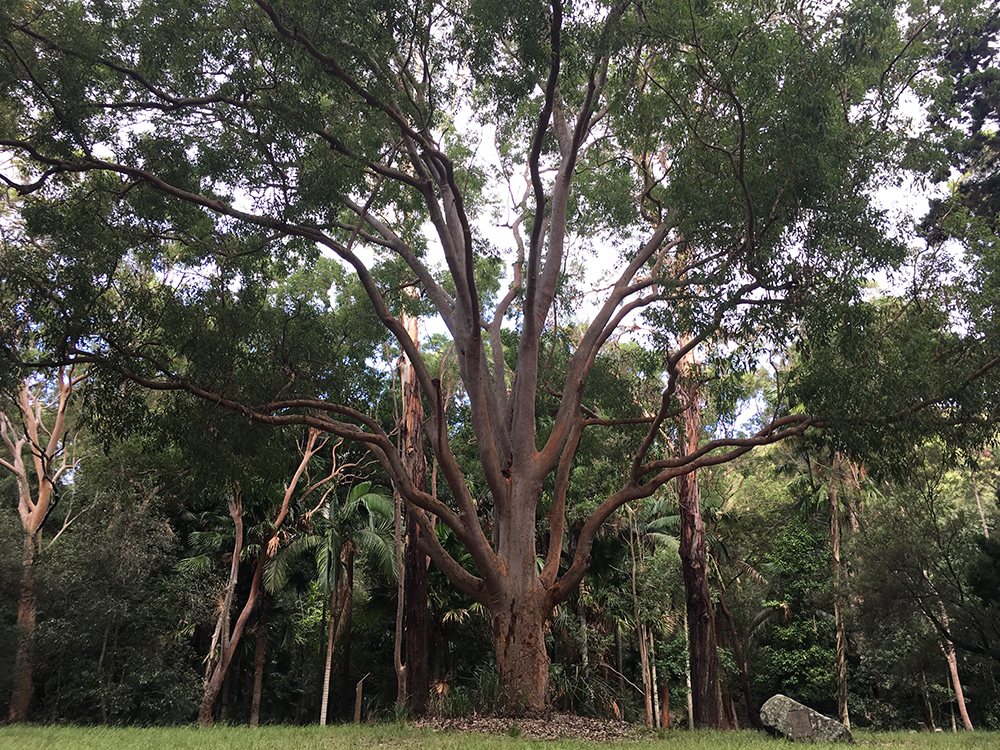 For more information on Minard Crommelin and Neave Parker: 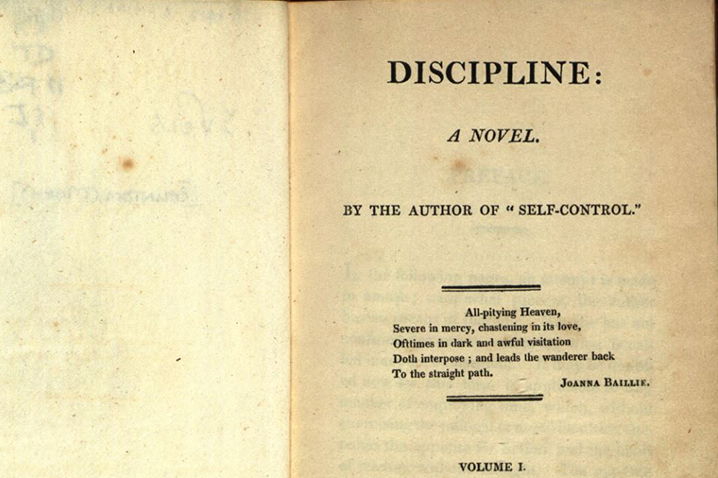 Semester one talks include:

In Discipline (1814), the Scottish novelist Mary Brunton created one of the first intentionally flawed heroines in anglophone fiction. Ellen Percy’s fictional autobiography tracks her development from spoiled, selfish schoolgirl to respectable wife and mother, as through suffering and dedicated effort her character is transformed. Arguably the inspiration for Jane Austen’s Emma Woodhouse, Ellen’s fictional journey is as moral as it is physical, combining traditions of spiritual autobiography with the tropes of sentimental literature.

Discipline’s literary impact is only now being recognised, but we can see the influence of the unlikeable Ellen Percy in Austen’s ‘heroine whom no one but myself will much like’. In this talk I discuss the process of restoring Brunton’s novel for the Chawton House Novels series and explain how this remarkable novel went overlooked for so long.

Dr Olivia Murphy works on British literature and culture of the long eighteenth century, with a particular interest in women’s writing, novels, and the relationship between literature and science. She is the author of Jane Austen the Reader: The Artist as Critic (2013), the editor of Mary Brunton’s 1814 novel Discipline (2018) and the co-editor of Anna Letitia Barbauld: New Perspectives (2013) and Romantic Climates: Literature and Science in an Age of Catastrophe (2019). She is currently a postdoctoral research fellow in the English Department at the University of Sydney. 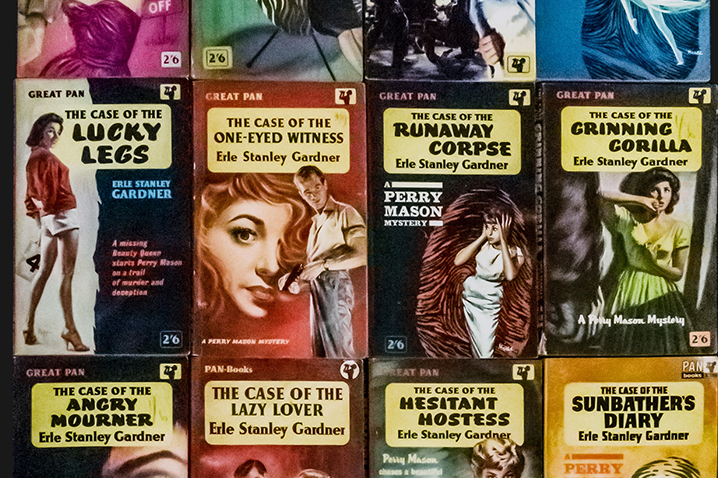 Lurid: Crime Paperbacks and Pulp Fiction showcases these books and their cover designs. For instance, the mid-century, green-saturated period of Penguin crime literature paperbacks demonstrates the ‘Marber Grid’, with two-thirds of the layout allowing for striking modernist illustration and bold graphic design. There is power in the simplicity of these designs with their limited colour palette, elements of photomontage, collage, drawing and geometric pattern, and use of sans serif font.

At the other extreme of the literary spectrum, there are the garish, titillating and often misogynistic designs that adorn pulp fiction covers. The racy titles and compositional elements of femme fatales and wanton dames, gangsters and gumshoes, and occasional homoerotic imagery, were designed to catch the eyes of disposable sleaze readers (and latter day criminologists).

Lurid: Crime Paperbacks and Pulp Fiction reveals and revels in a sense of each genre’s distinctive design, whether highbrow or lowbrow, and the visual impact of these compact, accessible and affordable publications.

This exhibition has been curated by Dr Carolyn McKay. Dr Carolyn McKay is a Senior Lecturer at the University of Sydney Law School where she teaches Criminal Law, Civil & Criminal Procedure and Digital Criminology. She is co-Deputy Director of the Sydney Institute of Criminology. Carolyn is recognised for her research into technologies in justice, specifically her empirical research into prisoners’ experiences of accessing justice from a custodial situation by audio visual links. Her qualitative study based on one-to-one interviews with prisoners provided evidence for her PhD thesis as well as her recently published research monograph,The Pixelated Prisoner: Prison video links, court ‘appearance’ and the justice matrix (2018) Routledge. Carolyn has published and presented in relation to other technologies and served on the 2019 NSW Law Society Legal Technologies Committee. She has been appointed to the 2019-2020 NSW Bar Association Innovation & Technology Committee. Carolyn has been a Visiting Scholar at the Centre for Socio-Legal Studies, University of Oxford 2019 and for 3 months at the Oñati International Institute for the Sociology of Law, Spain 2013-14. Carolyn has previously consulted on anti-dumping trade disputes and indirect taxation, working in both Sydney and Tokyo, and she also has a digital media/visual arts practice.