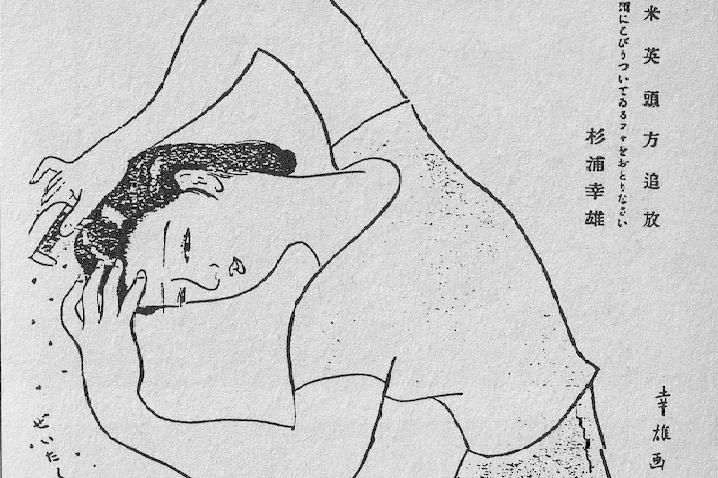 The Greater East Asia Co-Prosperity Sphere: to propagate or to be propagated is an East Asian Collection exhibition that feature wartime propaganda posters and photograph. A physical display is currently on level 4, Fisher Library.

CONTENT WARNING: The Greater East Asia Co-Prosperity Sphere: to propagate or to be propagated analyses and critiques visual representations of the political rationalisation strategies of the Japanese Empire during World War II from a historical perspective. The following post contains politically biased contents, including romanticisation and celebration of colonialism and racially vilifying imagery. The post does not reflect the views of the Library or the curator.

The Greater East Asia Co-Prosperity Sphere: to propagate or to be propagated

The Greater East Asia Co-Prosperity Sphere (GEACPS, 1931-15 August 1945) was a supranational framework consisting of the Empire of Japan’s colonial territories within geographical proximity near the metropolis from, but not limited to, Empire of Manchuria, Republic of China, Kingdom of Thailand, State of Burma, to Provisional Government of Free India. (See “Map of East and South-East Asia” below for the visualisation of countries’ geographical proximity to Tokyo, Japan).

Such geographical proximity influenced not only the structure of the colonial administration and racial hierarchies in the empire, but also the rhetorical strategies to legitimise colonial rule.

The ideology of the Japanese colonial empire to prosper Asia under its leadership preached the unity of the GEACPS, reflective of Pan-Asianism, with an established system to not only advance each nation’s economic role, but also assimilate politically, culturally, and linguistically. Although the intention was perceived skewed and geared towards Japan’s welfare specifically her economic and military interests, the mass media censored and controlled by the government reinforced amicable and constructive impression on colonisation and wartime assimilation, away from the realities of violence and inequality.

The wartime posters and photographs, exclusively censored, produced, and publicised, were pictorial instruments of the belligerent governments within the interconnected scheme of systematic rationalisation and justification. The propaganda of Imperial Japan oriented towards rationalising the conquest, justifying colonial rule and idealising war mission to mobilise the Empire of Japan during the Second World War as the “liberator” of Asia from Western colonialism and the “builder of new order”.

At the core of the Greater East Asia Co-Prosperity Sphere was Pan-Asianism that promoted the political and economic unity and cooperation of Asian peoples by depicting the war as a “race war” against the West, led by the United States and the British Empire. Pan-Asianism, which emerged in the late 19th century, was an ideology advocated and actively promoted by Japan to wield influence over the colonised territories and retain dominance through voluntary assimilation. Pan-Asianism was an instrument to legitimise the conquest and the subsequent colonial rule of Imperial Japan as the “liberator” of Asia from Western colonialism by encouraging patriotism to seek social equality through the expression of loyalty to a transcendental emperor. Hideki Tojo (1884–1948), Prime Minister of Japan during the World War II, praised the “spiritual essence” of Greater East Asia, which he contrasted with the “materialistic civilisation” of the West during the Greater East Asian Conference of 1943 (Tokyo, 5-6 November 1943) – which was responded by the members of the conference pledging solidarity in pursuing a race war. While encouraging peoples of the colonised territories to follow, Japan encouraged the Japanese army to lead. The ‘Read This and the War is Won’ booklet intended for the Japanese army unfurled Imperial Japan’s banner that it is a duty of the Great Power of Orient to stabilise Asia and emancipate its oppressed peoples “emasculated by generations of colonial subjugation, with blood and colour linked to that of Japanese… [and] make men of them again and lead them along the path of liberation”.[1]

The poster as a strategic means of disseminating information is potent, particularly within the context of a systematic wartime propaganda. The “blank canvas” quality of poster that enables graphic and visually arresting designs, manipulation of representations, and inclusion of symbolism and concise texts, made it an effective tool of propaganda.

Accordingly, a poster was often used for: advertising – targeted form of promotion for not only product but also ideology; stereotyping – arousing prejudices by portraying enemies with stereotyped racial features; dehumanising – depriving enemies of human qualities to generate a sense of fear and hatred; repetition – reiterating a particular symbol or slogan; and flag-waving – justifying violence a patriotic act based on the undue connection to nationalism.

The advertisement poster of international rail routes highlights Empire of Japan’s industrial achievement and its vision to become the “builder of new order” with the construction and expansion of transport services connecting Japan, Korea, Manchuria, China, and Europe. Along with the international rail routes advertisement, posters on coal mining of Mengchiang (Mongol Border Land), Taiwanese pure cane sugar, bank (of Japan, China, and Manchou), textile, hotel (“Hotel New Osaka”), and insurance, covered in The Almanac andadvertised in English language, are interesting to note.

The advertisement showcases one side of the coin without a glimpse of the other. Notably, the Burma-Thailand Railway is known as the “Death Railway” today due to the high death toll of a captive labour force of approximately 60,000 Allied prisoners of war forcibly engaged in the construction of rail line.

In a book War Without Mercy by John Dower (1986), “the white men were described as arrogant colonials who dwelled in splendid houses on mountainsides and hilltops, from which they looked down on the tiny, thatched huts of the natives. they took it as their birthright to be allotted a score or so natives as personal slaves”.

The cartoon by the Chicago Tribune’s Carey Orr was published three days after the Attack on Pearl Harbor as an unequivocal reminder of how the surprise attack on the U.S. Pacific Fleet became an indelible symbol of Japan’s inherent treachery, and inspired an immediate commitment to a ‘war without mercy’.

The above representations of the Allied forces are visually contrasting, with Japanese cartoon presenting the stereotypical obese and grumpy White-man, emphasising John Bull’s corpulence in comparison to the starving Indians positioned on the lower-left corner, while American cartoon is depicting a heroic, strong, and determined navy personnel.

The Japanese Empire did not only manipulate visual imagery to rouse collective antipathy toward the enemy, but also published cartoons to caution the public against the Western influence, particularly the individualistic and materialistic orientations.

This May 1942 cartoon from the government-sponsored magazine Manga is titled “Purging One’s Head of Anglo-Americanism,” with a caption, “Get rid of that dandruff encrusting your head!”. The scurf being combed out is identified as extravagance, selfishness, hedonism, liberalism, materialism, money worship, individualism, and Anglo-American ideas.

The fundamental quality of photography being a reflection of a moment in time, a photograph is commonly believed to bear a witness to history and preserve moments as the pictorial evidence of reality, objective and unbiased. The common misconception that disregards the intention and regulation of photographer allowed such quality of photography to be exploited in a systematic manner.  The photography was a convincing method of propaganda that exaggerated or fabricated reality to manipulate a viewer’s thoughts and emotions for an advantage. It was often used for the following strategies: bandwagon – the join-the-crowd technique that convinces a viewer to join the mass movement; inevitable-victory – that appeals the viewer her victory is assured; and euphoria – that promotes or fabricates an idealised vision of happiness and stability.

The below photographs are drawn from Japan Photo Almanac 2603 published by Domēi Tsushin-sha in 1943. Domēi Tushin was a news agency monopoly and a production of the Japanese government’s propaganda aimed to build foreign publicity; a sole voice through which government-approved lines and broadcasted news transmitted abroad in different languages. The Almanac was a celebratory annual record captioned in English and Japanese languages that traces victory throughout the war progression and offered skewed insights into colonisation and wartime assimilation, with coverage of amicable photographs.

The Almanac appeals to the reader that Japan has achieved its claimed objective to emancipate oppressed peoples of Asia under Western colonisation, and manifests political, cultural and linguistic assimilation is voluntary,  and for the betterment of Asia as a collective.

Please note that the titles enlisted for the photographs are strictly drawn from the publication.

About the curator: Dohui (Abigail) Kim is a Master of Art Curating student at the University of Sydney, interning at Rare Books & Special Collections. Dohui graduated from the Australian National University with a Bachelor of Art History and Curatorship in 2019 with double minor in Anthropology and Japanese Language. 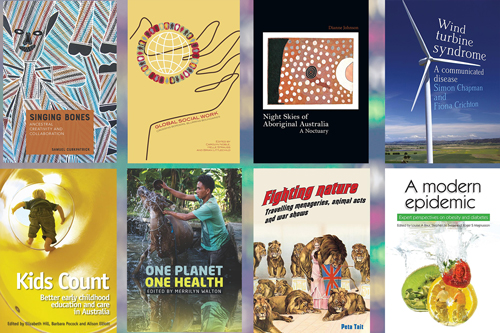 Sydney University Press have compiled some of their favourite free reading material from their own open access collection and from around the world. There is history, Australian poetry, classic children’s picture books and much more to choose from!

Created by the University of Sydney and the Australian Copyright Agency, the Australian Poetry Library hosts tens of thousands of poems by Australian writers, plus recordings of poets reading their work.

Several books in our Indigenous Music of Australia series have companion websites, where you can learn about the music of Indigenous communities and stream audio and video recordings of musicians performing their songs

Throughout the 19th century, animals were integrated into staged scenarios of confrontation, ranging from lion acts in small cages to large-scale re-enactments of war. Fighting Nature is an insightful analysis of the historical legacy of 19th-century colonialism, war, animal acquisition and transportation.

From Indigenous Music of Australia:

Manikay are the ancestral songs of Arnhem Land, passed down over generations and containing vital cultural knowledge.

Singing Bones foregrounds the voices of manikay singers from Ngukurr in southeastern Arnhem Land, and charts their critically acclaimed collaboration with jazz musicians from the Australian Art Orchestra, Crossing Roper Bar. It offers an overview of Wägilak manikay narratives and style, including their social, ceremonial and linguistic aspects, and explores the Crossing Roper Bar project as an example of creative intercultural collaboration and a continuation of the manikay tradition.

Be the first to find out about new Library titles!

We  now have  three  new ways to bring our collection to you. Use these fast, simple  ways to better discover our new titles:

> Take a glance at our Online Bookshelves/Carousels of the most recent new titles.

> Set up Search Alerts to get weekly emails about the new titles you want.

For more information about these tools see our New titles FAQ.

Please send us your feedback via Ask Us Now