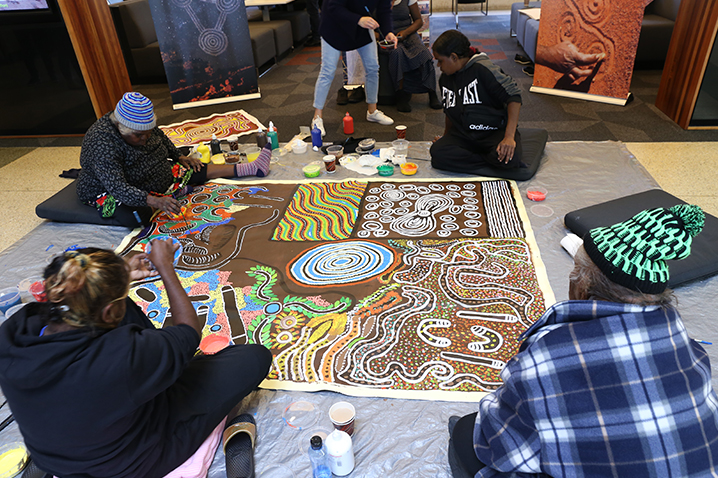 This NAIDOC week the Library has been lucky enough to host Artists in Residence from Warburton in Western Australia.

The artists are visiting to celebrate the launch of the new University of Sydney digital portal of Indigenous Knowledges.

The portal is about the commitment by the University to ensure that Aboriginal knowledges are embedded in the learning, teaching and research at our University.

The small town of Warburton in remote Western Australia is home to the largest collection of Aboriginal art owned by Aboriginal people in the country, if not the world. This astonishing body of work by the Ngaanyatjarra people has been collected over the past 30 years, with the community acquiring all of the significant works being created there. Consequently, Ngaanyatjarra art is rare on the market, with the most outstanding examples sitting within the 1000 strong Warburton Art Collection, managed by the Warburton Arts Project.

This collection is a spectacular example of how Ngaanyatjarra knowledge is celebrated, remembered, made new, and shared. The Warburton Arts and Knowledge Project, by way of a digital portal of Indigenous Knowledges, interfaces these alternate world views with our current teaching pedagogies, thus allowing any student, researcher or lecturer immediate access to Indigenous Knowledges.

Visit Fisher Library Foyer this Thursday 11th July to see the artists at work and chat to them about their process.

We will also be exhibiting the works from the new portal at
ThinkSpace until 19th July 2019. Visit for your chance to see some of the incredible artworks in detail on the Digital Wall.

Are you new to the University? The Library is here to support you & what better way to get to know the services & facilities we have to offer than Welcome Week, Semester 2.

From Monday 29th July to week 1 of Semester, we have a jam-packed schedule of awesome activities for you to take part in. Join us in everything from Speed Meet & Chat, Virtual Reality Escape Rooms, Karaoke, Library Tours and more!

Check out our full program of events on the Welcome Week website.

We can’t wait to meet you! 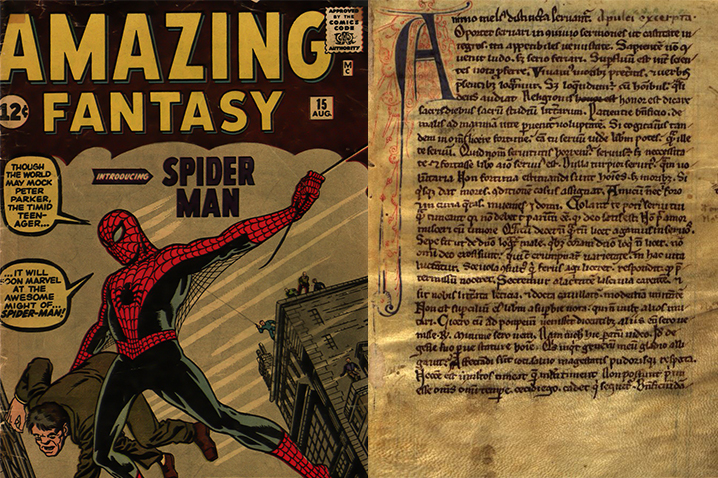 A Bunch of Flowers from Medieval France: The Twelfth-Century Florilegium in Fisher Library

Join Dr James Kane, lecturer at the University of Sydney discussing Florilegium, in our final rare bites talk of the year.

One of the many types of manuscript in circulation during the central Middle Ages was the florilegium (plural florilegia), a Latin word meaning ‘a collection of flowers’. Medieval writers tended to use florilegia to compile quotations and longer excerpts from works of literature, philosophy, history, and so on by the great classical and patristic authors of the past. Nicholson Ms. 2 is a late twelfth-century florilegium from France that has the distinction of being one of the earliest medieval manuscripts currently held in the Rare Books and Special Collections Library. It contains excerpts from the works of St Jerome, Apuleius, Cicero, Boethius, Seneca, and other Latin luminaries.

Though relatively unadorned, the manuscript shows various signs of usage over time and is a perfect example of how medieval annotators could keep books alive by appropriating marginal space. This talk will outline the contents of this florilegium, discuss its script and layout, and explain what its various marginal annotations and other features reveal about how it was used.

Dr James Kane is a lecturer at the University of Sydney, where he currently teaches Old English and Old Norse language and literature. He completed his PhD at the University of Cambridge in 2016 on the topic of how crusading terminology evolved across various western languages between the eleventh and thirteenth centuries. He is now preparing this thesis for publication under the tentative title Wearing the Cross in the Medieval West, c. 1095–c. 1300.

The Orphan of Zhao – An Influential Chinese Drama

Join University of Sydney Alumnus Jenny Zhijun Yang discussing The Orphan of Zhao in our fifth Rare Bites talk of the year.

The Orphan of Zhao was a play written by Ji Junxiang dating back to 1330 AD and explores the main themes of revenge and retribution. The play was the first specimen of Chinese dramatic literature translated into a European language.

The Library’s Rare Books and Special Collections owns two adaptations of the play by Voltaire in 1755 and Arthur Murphy in 1759. This talk will focus on the original play and its adaptations to explore a special type of cultural exchange.

Jenny Zhijun Yang graduated with a Master of Art Curating with distinction at the University of Sydney in 2018. She graduated from the University of Auckland with a Bachelor of Arts in history and Asian studies in 2017 and was awarded the Summer Research Scholarship of the University of Auckland. Jenny is a currently a gallery assistant at the Museum of Contemporary Art Australia and was previously a gallery assistant at the Auckland Art Gallery. She also works as a collection manager for a private collector. Jenny has Chinese heritage and her dream is to share her knowledge of Chinese civilization with others.

When unsuspecting teenager Peter Parker got bitten by a radioactive spider and later realised with great power there must also come great responsibility , America’s ‘most different new teenage idol’ and superhero Spider-Man was born.

Join University of Sydney alumnus Matthew Skinner as he discusses the origin of Marvel Comics’ flagship character within the pages of anthology book Amazing Fantasy #15 by co-creators Stan Lee and Steve Ditko (1962) in our 4th Rare Bites Talk of the year.

His presentation will explore Lee and Ditko’s tightly plotted, scripted and drawn 11-page collaboration, why their publisher was initially hesitant to print the story, the readership’s reaction to their teenage protagonist, and the pair’s later feud over who exactly created the hero.

Matthew has over ten years of experience delivering marketing, media and communications insight across the sports and higher education sectors.

His exposure to, and passion of, comic books as a medium spans thrice that.

Matthew completed his Bachelor of Arts (Honours) in 2006, presenting his thesis on The Literary History of Comic Books in America Between 1938-1975, and more recently his Master of Media Practice in 2010.

This talk has passed, however you can view this Rare Bite on our Youtube channel: 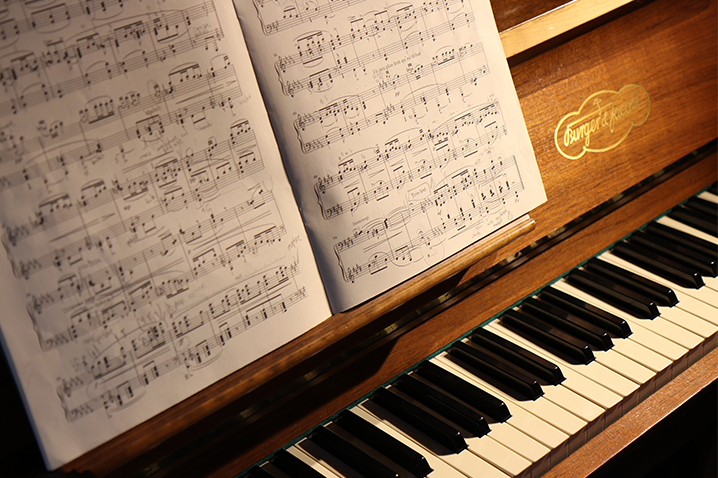 Join us for our exhibition opening event

Listen to recordings from the exhibition on Dr Jeanelle’s website
(if required, select ‘advanced’ & ‘proceed’ to be redirected to the site) or visit Dr Jeanelle’s researcher profile page.

Visited this exhibition? We would love your feedback in this short survey. 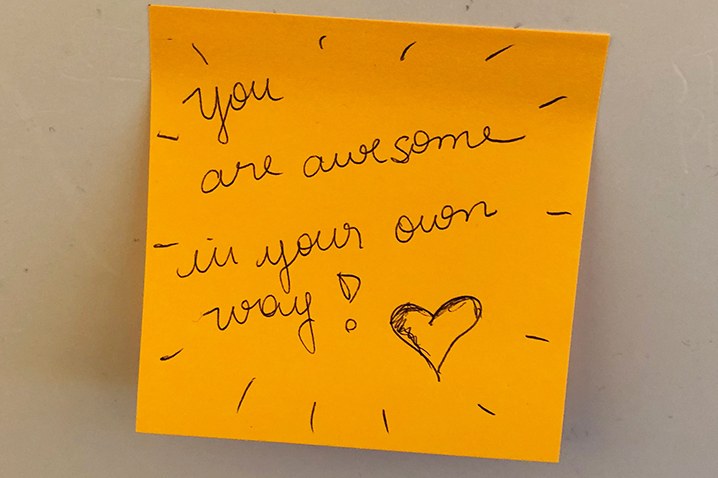 Exams got you down? As part of our Exam Ready program, the STAR team (Student Transition and Retention) and the Library have put together a program of events to support you during exam season.

This includes our Chill Out Zone in Fisher where we asked students to leave a message of positivity for other students.

Here are some of our favourites:

Visit the Library website for more information and for the full program of Exam Ready events & best of luck with exams! 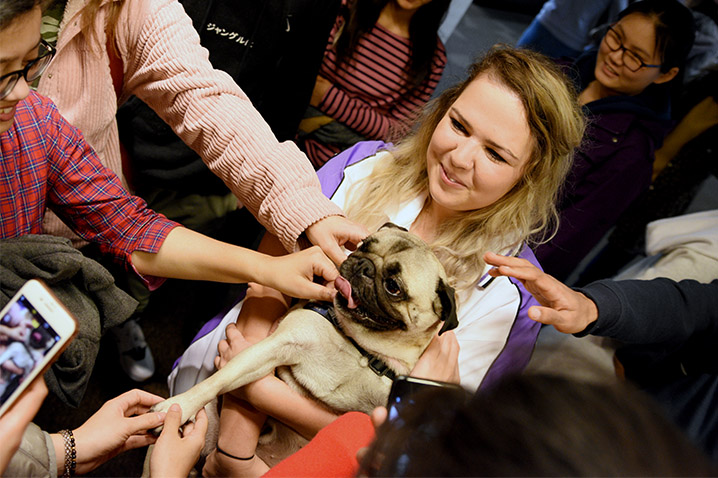 Feel like you have more to learn that brain capacity? Panicking over impending deadlines? Pressure and stress to pass & do well?

Exam time is tough, and at the Library, the hub of group assignments, 3am cramming & intense studying, we know all about it! So, together with the STAR team (Student Transition and Retention), we are here to help!

Here are some ways you can destress and study effectively for exams this semester:

What better way to unwind than a soft, furry cuddle from one of our four-legged friends? Therapy dogs will be visiting Fisher, SciTech and The Quarter Libraries during our Exam Ready program so you can take a break and get your dose of puppy love. Visit our Facebook page for details.

Reduce your stress by taking some time out for you this exam period. Our free yoga and meditation sessions are designed to refresh your body and mind between study sessions, so you can stress less & focus more. Free fruit is also provided at the end of each session. Visit the Exam Ready page for more details.

If you find it challenging to power through distractions and get things done, our Focus & Study sessions are for you. Using the Pomodoro technique, these sessions are all about short bursts of intense productivity. Come along with your study notes and walk away feeling accomplished.
Visit the Exam Ready page for more details.

Sleep = the secret power to retaining information. Drop by our Nap zones in Fisher and Health Sciences Libraries for a power nap to rejuvenate and up your productivity. Visit the Exam Ready page for more details.

Get creative, messy and give your brain a break with some craft at ThinkSpace. Drop by and get creative those creative skills in action- a zen way to clear a cluttered mind. Visit the Exam Ready page for more details.

The Library and the STAR team (Student Transition and Retention) have lots more activities happening this semester to help you get through exams. Visit the Library website for more information and for the full program.